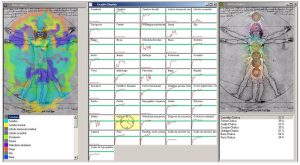 The areas of the organs react intelligently to conscious and unconscious thoughts, feelings and emotional information. The interaction of body and psyche are exposed through the aura with dynamic colors . By measuring the dynamic aura around the body, a qualified trainer can quickly recognize the total body and mental constitution, the perfect relationship of substantial energy, tensions and potential blockages in the person. A review of energy is an important tool for forecasting based holistic health. 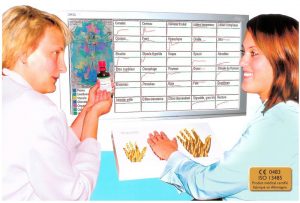 When people show high energy frequency colors such as navy blue, magenta or white on the head (in the measurement of the brain) it means they have a lot of energy to positive thoughts and good awareness programs. Lower frequency energies show that thoughts are negative and that these people are experiencing difficulties in their lives.

A healthy body must be in the range from green to turquoise. A deviation from the harmonious colors of the aura indicate weakness and suffering.

We have seven major chakras associated with the human body, and many others even less important. The seven main chakras do not exist in reality as “objects” (actually energy patterns), but there are specific places on the body that correspond to five along the spine, and two in the head. Each chakra has the shape of a funnel or vortex of energy. Their vortices are inside the body, along the spinal cord (corresponding to a center channel energy) and up into the head. Each of the seven chakras has both a front (usually dominant) component, and a rear portion (usually less dominant) component, which are closely related.

The first and seventh chakra, however, usually represented and are treated as if it were a single dominant component, as it is much more significant than the weakest component in these two chakras.

The seventh chakra extends vertically upwards above the head. The first chakra extending forwardly from the base of the spine, and downwardly to an angle of 30 to 45 degrees, although its exact location can vary from person and often seems mainly extended downward towards the feet .

Each of these seven main primary energy centers or chakras, has its own character and corresponds to a single aspect of our being. From the first chakra (physical vitality, or survival) in the seventh chakra (the totality of being, or spiritual perfection). Because the chakras are spiritual entities, it is impossible to convey a true explanation of the nature of each chakra in words, but it must be experienced.

Each chakra also has some real color of the visible light spectrum associated with it, from the red (first chakra) to violet (seventh chakra).

The chakras are energy processing centers. Energy operations within these are what make all aspects of our body, emotional, mental and spiritual life possible. Each chakra is receiving energy from around itself, and it is this energy that supports the field of energy and the whole process of life of each individual. Besides this energy input in the field through each of the seven main chakras, there is also an upward flow of energy in the central energy channel, from bottom to top chakras. This upward flow of energy comes mostly from the earth and then moves through the first chakra, the second chakra, etc., and finally ascends to the (crown) or seventh chakra. This energy is processed on each chakra, on their way up, according to the unique nature of this chakra. The operation of the lower chakras is simpler, but as energy rises upwards there is a higher degree of performance which is closely related to the life experience and the state of wellness. 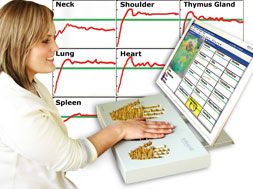 A defect in the flow of energy through any chakra will result not only in a defect in the energy supplied to certain parts of the physical or body associated with that chakra, but also affect emotions, mind and spirit in a certain way the nature and character of that particular chakra. Defects in a certain chakra also typically affect many other parts of the energy field to process energy. This is because the energy field is a holistic entity: each part affects every other part, so it is considered a unit.

The seven chakras are vital when we learn to use energy that leads to healing. It is important to reiterate, however, that the true healer of energy learns to expand your consciousness and experience of each of the chakras through Being. Each chakra is a kingdom with its own nature and consciousness. This is not a thought process, but one that simply open and you let these impressions form your whole being.

Light and Colour both are very important to preserver the health of human beings and the animal kindgom!

Throughout history man has used solar energy as medicine. People used to expose patients to the sun in order to improve their health. The ancient Egyptians, Greeks and Chinese used color therapy.

The scientific theory to explain color therapy came through Isaac Newton, with the discovery of spectral analysis. Johann Wolfgang von Goethe studied the effect of color on the human psyche and proved the close relationship between colors and feelings.

In 1903, Professor Niels Finsen received the Nobel Prize for Medicine for his research in the area of ​​color therapy. Finsen had proved that colors are independent energies and vibrations of a certain color can cause different reactions in the human body and psyche.

In 1933, Dr. Dinshah Ghadiali wrote about his discoveries and medical research on the application of colors in the Spectro-Chrome Metry Encyclopedia. Since then more than 6,000 cases of healing through color therapy have been documented in US clinical trials.

Dr Dinsha Ghadiali created combinations of colored light treatments for a variety of conditions, such as burns, fractures, asthma, neurodermatitis, diabetes and mental disorders, etc … Many authors continue to cite their research data and many doctors refer to these. Ghadiali has a high value diagnostics prior to starting any treatment aura. Aura diagnostics have been determined by using various tools and methods developed.

Dr. Finsen light color used to treat a variety of skin diseases and infectious diseases. In traditional medicine, infrared and blue light is also frequently used to treat various ailments. In modern clinics often clear blue light treatment is used to treat jaundice, a common condition in infants. Dentists use blue light for the relief of pain and infection prevention. Even the aviation industry recommends using green light to calm and reassure people with anxiety and nervousness and to increase energy and endurance.